[JavaScript] Why do we need tests? 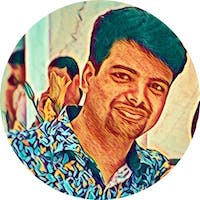 Subscribe to our newsletter and never miss any upcoming articles

Running a program without tests is like using a mathematical formula without proof. We “hope” program will work as expected for every input.

The process of converting pseudo code to a working program usually takes one special step at the end called testing. When we write a function we imagine parameters and expected return type. We check whether the function works by running it, if the results produced are as expected, we move on to next function. If something goes wrong we study the results, fix the problem and re-run the function until it yields a correct result.

But this process of manual re-run to check for errors often lead us to miss some cases. For example, function foo(a) gives the expected result but foo(b) does not. We will then fix the code to make foo(b) work but forget to re-run and check foo(a).

When we run functions we want expected results every time, and thus functions are designed that way, but it is impossible even for programmers to assure the correct output from a function on every execution. To tackle this issue, we use automated testing.

An automated testing is a procedure where the tests are written separately in addition to the code. These tests are executed to check the expected output of the programs. The outputs of various specs and their test cases are validated with assertions. This way, whenever programmers change the code, they can run automated testing programs to validate results.

In this article we will see how to setup testing in nodejs. I will be using Mocha which is a testing framework for both front-end and back-end javascript. And we will discuss basics of testing by writing some specs and test cases for lodash library.

I have prepared a github repo containing all the code and test files which are used in this tutorial. You should begin by cloning and installing the dependencies.

Run the tests in terminal with following command. 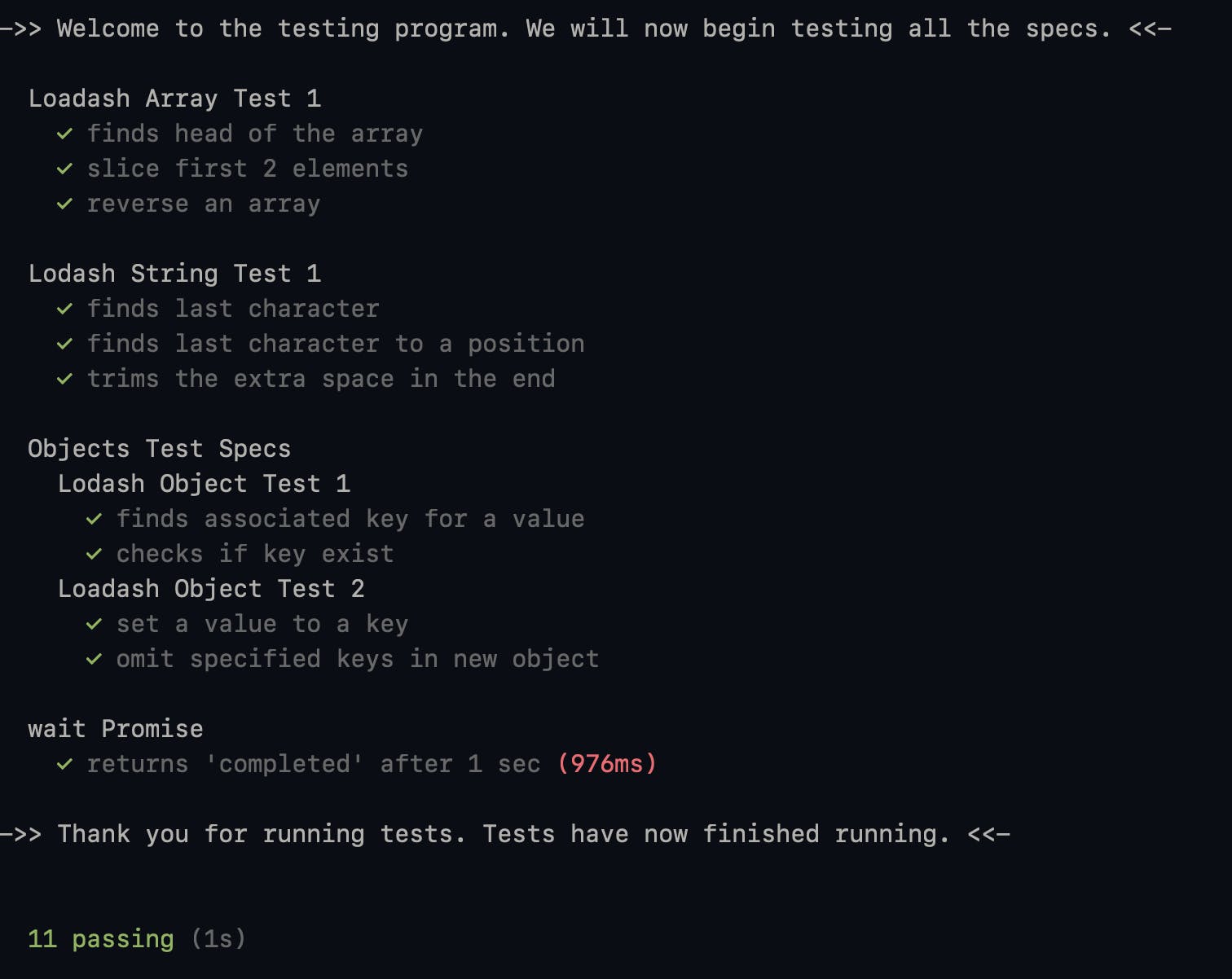 The final version of testing code is in the master branch, however there is a start branch which contains boilerplate setup for you to practice. npm run test script hot reload mocha as you create new tests.

A specification or spec is an entity that describe what a functionality is expected to do in various cases. Example, Let us say we want to test Math.max() function, we can write a spec in the following manner.

This snippet is entirely one spec and contain three blocks.

describe As the name suggests, it describe what functionality we are testing. It takes a String description like 'Math.max' and an anonymous function as parameters.

assert The output of any functionality is validated by comparing it with an expected value. Assert block compares the output and returns a boolean value.

done is special callback that tells mocha to conclude a test case. We will discuss more about that later in this tutorial.

All the test files are contained in a directory named test in root of the project directory. Testing frameworks look for this directory and execute every test file in it. In the cloned repo, open test/test1.js file which has following code.

The first case is about testing _.head method. As intended, this method should return first element in an array. This return value is then compared with the expected value of 1 in testArray variable.

An assertion is done with assert.equal method. We could also have passed an expression instead of using .equal in assertion block.

This is the basis of writing tests. We create a describe block to check a functionality and create multiple test cases with it blocks. We can also implement multiple assertions inside it blocks if required.

For example, it blocks after performing tests can change the original value of test variable testArray. This will lead to poor testing and incorrect assertions by other cases.

We can use a beforeEach hook that will reset the value of testArray variable before cases are executed. The hooks must be defined in the scope where they are needed. In our case we have defined a hook inside of describe block that will run before each it block.

Hooks take an anonymous function as a parameter. In the above code a simple beforeEach is defined inside describe that will reset the value of testStr to hello before it blocks are executed.

If a functionality have sub-functionality that could utilize their own spec, you can nest them in parent spec.

In the above code, spec Lodash Object Test 1 is nested inside of Objects Test Specs. The beforeEach hook applies to each spec before execution.

Mocha execute tests asynchronously, meaning it will not wait for a case to finish before executing the next. While working with promises the program might need to wait for sometime.

To work with promises, you can utilize done callback. Lets see it with an example.

In above code wait promise takes 1 second to return a value. Done is called inside of .then block to tell mocha to conclude the test. done is an important callback that must be passed after each test case is asserted.

Something that I did not explained fully is assert module, it is available directly via node. You can read more about it here. If you followed this article you have attained the minimum requirement of knowing how to setup and run test in javascript. Setting up tests in a javascript/node project is easy but your tests are only as good as your assertion logic. If you have any suggestion/query please comment down below or DM me on twitter. 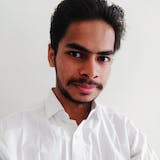 Which one is the best to use for writing tests for JavaScript & Vue.js? 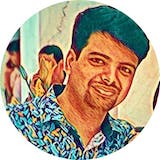 If you are beginning Mocha is simple and good both for front-end and back-end. Vue-CLI also have built in option for Unit Testing in Mocha.

But I've heard great things about Karma.js for front-end. Source:

Ah! Thanks for the reference. 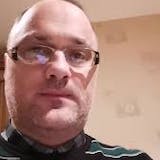 Nice article. I would like to add that not every thing can be unit-tested with a test automation framework. At least, not practically- if your single test would run for a several days. Consider this, that you are building software which categorizes movies by genre. You can't write a unit test for just a several movies and if they are correctly categorized - hope that your algorithm predicts genre well. It's not working like so. Typically you would want to calculate false positives and false negatives for a genre detection of let's say 2'000 movies. If you will get these false positives / false negatives ratios as a small numbers from this movie set - only then you can conclude that your algo works as expected and change X in the program hasn't broke the classification quality. The problem is that classifying such huge amount of movies requires a long time. So it's reasonable to put such classification task in some sort of CRON scheduler which would be run regularly until it finishes classifying a movie test set. Only then you can calculate FP/FN ratios and say if your test has passed or not. What I'm trying to expose here - that long-running tests may not be suitable for a automation frameworks.

I have noted down this fact and will come back to it as I advance my knowledge in testing.